From our travels and interaction with many ethnic groups, I have become interested in how native peoples create a sense of collective and self identity in their wider and local communities through the use of clothing, jewellery, scarification etc. This is very much an ongoing project and I don’t know where it will lead ………

In the first example, a Himber woman wraps her hair extensions (usually goat hair) in clay. The form above the forehead indicates that she is a married woman.

In the second example, a Pokot girl paints herself with chalk, wears leather clothing and has a shaved head to mark her transition to adulthood.

In the third example, a Tuareg man wears the characteristic turban.

In the fourth example, a Tuareg girl (from the town of In Waggeur, Niger (1)) wears jewellery based upon the Aggadez cross (The four points of the “cross” symbolize the four cardinal points and along with the north star, they serve as guides to those who travel the vast and inhospitable Sahara; “My son, I give you the four corners of the world because one cannot know where one will die” (1).

And the last example: A Pokot elder has little head decoration, only tufts of hair left unshaved at the back of the head, but carries an enormous pipe in his teeth. 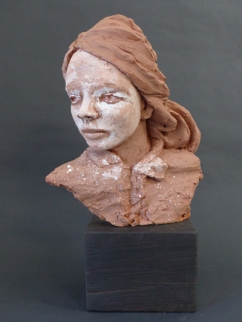 “Pokot” girl – “not girl, not yet woman” – terracotta with coloured slips – 48 cm with base 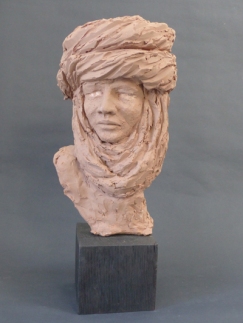 Tuareg man – terracotta with coloured slips – 50 cm with base 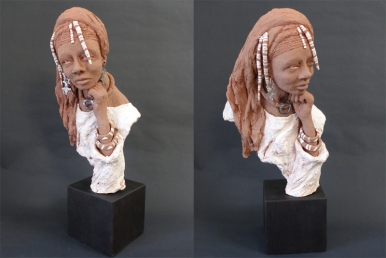 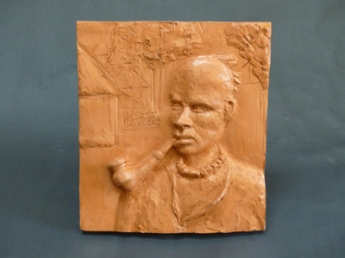